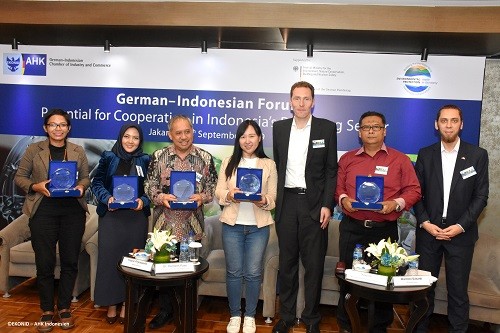 There is a wide room for growth for Indonesia’s recycling industry. The right set of policies for waste separation followed by the right recycling technology will go far in maximizing the sector’s potential.

Held by the German-Indonesian Chamber of Industry and Commerce (EKONID), the event was organized as part of the export initiative “Environment Protection Made in Germany” of the German Federal Ministry for the Environment, Nature Conservation and Nuclear Safety (BMU). The participants were made up of representatives of the bilateral business interests of Indonesian and German companies, as well as their various institutions.

Mr. Rönnfeld said that EKONID was proud to host the German-Indonesian Forum on Potential Cooperation in Indonesia’s Recycling Sector. He said waste was a global issue and that the forum was a solid platform to further discuss current issues and the possible solutions within Indonesia’s recycling sector.

“I’m certain that the lessons we’ll learn and the networks we’ll make in this event can play an important role in our future efforts to reduce waste while maintaining economic growth,” he said.

Mr. Barkeling said that cooperation between Indonesia and Germany could be beneficial for both countries. He said the rapid growth of Indonesia’s economy would, in turn, contribute to the increase in consumption, adding that Indonesia produces 10 million tons of plastic each year and recycling only 8% of the number.

“Both of our nations are concerned about waste. Politically, it is important for Indonesia to increase its recycling capacity,” he said. “From our experience in Germany, this can open business and work opportunities. I think Indonesia can take advantage of this.”

Mr. Sidik from the ministry said the Indonesian government is aware of the nation’s waste problem and that it is continually working to encourage the Indonesian population to take an active role in managing waste, such as by separating organic and inorganic waste – a practice that has been estimated to be able to have a significant impact in reducing waste while at the same time propelling the growth of Indonesia’s recycling industry forward.

“We are very serious to make Indonesia clean and good. So we have like I said before, we have already put the target, ambitious target, to reduce waste and to handle our waste properly. This is the indicator of how government [is] very serious on this issue,” he said.

Don Kamarga, Managing Director of PT Beton Elemenindo Putra, a company that recycles polystyrene foam – also known as styrofoam – into building materials and floating structures, agreed that waste segregation is an important aspect of realizing the potential of Indonesia’s recycling industry. He commended EKONID for holding the forum as it further raises the awareness of both Germans and Indonesians on how both countries can improve cooperation in this sector.

Send us an enquiry.
Fill the form to connect with us.
Testimonials.
“Last week Indonesia was a white spot on our map. Today we have several companies interested in our products and willing to work with us.” Wor...
Laszlo Penzes, HUNGARY
“EIBN accomplished a very privileged E-Health Market Study with data collected on the ground and from local players otherwise virtually impossible to o...
Siniša Košcina, CROATIA
“EIBN’s action on the ground consistently complements our diplomatic efforts and is an undoubtedly powerful resource for any EU Member State repr...
Cristian Epure, ROMANIA
more testimonials
© Copyright 2022 EU-Indonesia Business Network
Privacy Policy Disclaimer
Contact Us